Legends Turn Out in Support of Bosh 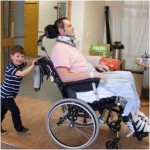 Antonia Bennett is a friend and a former client.  She is just about one of the nicest client contacts a PR agency could hope for.

This is an update on her husband who suffered a serious injury while playing rugby.  There was an article published here in the Manchester Evening News and there is much more information on the Lymm RFC website

Here is the a press release on a fund raising event in aid of The Alex Bennett Fund for Spinal Injury Charities:

Former Saracens’ and England A flanker, Alex “Bosh” Bennett, would be extremely grateful if any members of the media could help to promote his fundraising match on 14th July at Lymm RFC between the Bosh Legends, captained by Nick Easter, and the England Legends, captained by Martin Corry. The game will be in aid of The Alex Bennett Fund for Spinal Injury Charities, The RPA Benevolent Fund and The RFU Injured Players’ Foundation.

The fundraising day will include a coaching skills class for juniors by World Cup winner and former Saracens team mate, Richard Hill, as well as family entertainment, a beer tent and black tie fundraising dinner in the evening.

Match tickets will be available on the gate at Lymm RFC, Crouchley Lane, Lymm, Cheshire priced £10 for adults and £5 concessions. To book a table at the evening’s fundraising dinner with the Legends guests can email [email protected].  Some tickets, tables and sponsorship packages are still available.

Bennett, who represented England A, the Barbarians, Saracens, Orrell, London Welsh and Brive during his 10 year rugby career, broke his neck turning out for his local team Lymm RFC at Sandal in February. The severity of the injury left doctors and family fearing he could be left paralysed, but Alex refused to contemplate never being able to walk again. After an emergency operation and a period of painful traction, his first challenge was to breathe without the aid of a ventilator. 11 weeks later he took his first steps with the help of physios at Southport hospital.

The courage and determination shown by Alex during his rehabilitation has been an inspiration to other patients suffering from similar injuries and the speed of his recovery has been incredible. His humour throughout has also provided a source of strength to those around him. To stop his three children worrying, Alex told them he was in “Superhero rehab” which led to his eldest son William, 5, asking for him to come back as Batman!

The fundraising match on 14thJuly is Alex and his family’s way of thanking everyone in the rugby community who have shown such steadfast support during the horrific period in their lives.

Bennett said: “The support we have received has been overwhelming. I know we often talk about a rugby fraternity, but never has that sense of family been more evident than in recent months when our life changed irreversibly. I cannot thank Steve Rule and everyone at Lymm RFC enough, not just for supporting me, but also my wife Antonia and our three children. From hospital visits to blogs on their website updating concerned friends, they have been like a family from start to finish. Nigel Wray and Sarries team mates were also some of the first people to visit and to write to me and I have received letters of support from every area of the game imaginable, which has been truly humbling.

“This fundraising match is my chance to give back to the rugby community and to those who have supported me like the IPF and RPA Benevolent Fund and is an opportunity for me to help raise valuable funds for other people who might find themselves in a similar position. The road to recovery would have been so much harder without the support I have received from the rugby fraternity and from the staff at Pinderfields, Leeds General Infirmary and Southport Spinal Injuries Unit, so thank you everyone.”