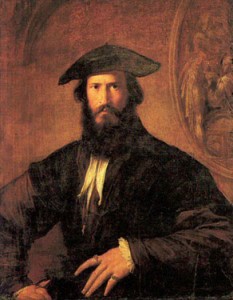 Keanu Reeves as a time traveller…

Why is the internet currently obsessed with Keanu Reeves?

This is a PR blog and the internet meme is an industry obsession, so I am really keen to found out more about what makes a good internet meme.

In an attempt to make sense of this phenomenon and blog on the topic, I am currently interested to find out why Keanu Reeves has become a cult internet figure, much like Rick Astley, with sites like Reddit posting about him regularly.

If you have anything sensible to say on the subject, please leave a comment on the blog, or answer my request here on Quora.

**update** here is one answer via Quora, from Joseph Jegvan-Andrej Cir. He said:

I believe it stems from two events. The first was when the story broke about Keanu giving away $72 million of his own money to crew who worked on The Matrix in the believe that they had been unfairly compensated. There is a notable story in itself, worthy of some mention and bearing some repeating. That is the kind of justice the internets can get behind.

The second is a sub-meme which branched from this initial spike in popularity: the photo of him sitting on a bench, looking miserable, and eating a sandwich.  This photo is basically asking to be shopped, and shoppery is a very effective means of spreading a meme.

I am basing most of this on reddit, which is lately the place where I put my fingers to feel the meme-pulse of the web 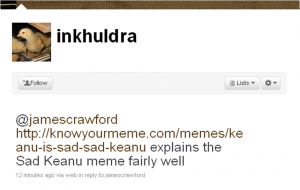 This is the link from the tweet which details everything you’ve ever needed to know about the Keanu meme.

**Update 3**
This helpful answer was lifted from Ask Reddit:

Despite the huge movies that he has featured in and the millions of dollars that he has earned, he is has been an exemplary person. He spent hundreds of thousands of dollars buying motorcycles for all of the stunt workers from the Matrix because he felt that they did all the hard work. He has taken care of a sister for quite a few years who has been suffering from Leukemia. In addition to this, he actively donates quite a lot of money and does fund raising for Leukemia research. He has given up money for roles so that he can bring on other actors that he wants to work with. The list goes on and on.
Despite the opportunities and resources that he has, he lives a relatively modest life, giving what he can so that others can benefit more than himself. He is sort of a model for what celebrities should and can be.