A return to the commercialised ghost of Christmas ads past?

The run-up to Christmas has long focused on which consumer brand can create the best seasonal advertisement – one that captures the hearts and minds of the public at this “Most Wonderful Time of the Year”.

In years past, some of these advertisements have appeared to be nothing more than attempts to sell products wrapped in an uplifting Christmas package.

But in recent times we’ve seen many of the big brands attempt to dilute the pure consumerism with an outpouring of corporate social responsibility. This predominantly has meant partnering with big name charities to temper marketing messages with a dash of social consciousness.

But in a year marred by bad news, it appears the tides of the commercial Christmas ads are rising again as John Lewis ditched the sombre “sadvertising” strategy, opting instead for a more light-hearted approach.

Moving on from the #ManOnTheMoon campaign it ran last year with Age UK, the marketing team at the high street stalwart created an advertisement about a boxer dog and a trampoline in partnership with The Wildlife Trusts.

And, in the true spirit of Consumermas – I mean Christmas – you can of course purchase a cuddly Buster the Boxer toy for £15 on the John Lewis website, although 10% of the selling price goes to charity.

Other high street brands, such as Sainsbury’s and Marks and Spencer, are opting for light-hearted campaigns too, shifting slightly back to the consumer ads gone by.

There is one Christmas ad, however, which is sticking to its guns in making an emotional appeal. It’s standing out from the crowd and is pretty close to home for a lot of people. This is an ad which does not bear the name of a big consumer brand, nor is it seeking to make any profits from the commercialised Christmas spirit. It is a campaign, though, that is making waves – probably due to all the tears it’s responsible for causing.

The campaign in question is the Santa Forgot advertisement, brought to us by Alzheimer’s Research UK. The two-minute ad is a beautiful animation created by the team behind Wallace and Gromit and narrated by Stephen Fry.

This advertising campaign is not pressuring you to celebrate Christmas lavishly, or encouraging you to spend loads of money on expensive gifts.

Instead its message is poignant, simple and clear: Alzheimer’s Disease, and dementia, does not discriminate and can affect anyone – even Santa, and only research will help us tackle it.

The narrative takes place in a world in which a small girl – Freya – is told that a Christmas decoration of a man in a red suit is actually Santa Claus, who once visited houses delivering presents.

It is explained that as Santa got older he became more confused, muddling up names and gifts, before stopping visits altogether.

Emboldened by this revelation Freya sets off on a mission to help bring back the magic of Christmas with the help with Santa’s former helpers, who ditch toy making to begin a search for an Alzheimer’s cure. 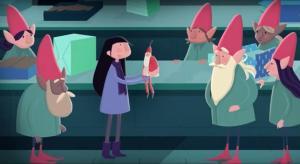 The true message hits home as Freya makes a personal visit to Santa.

Offering a hand and whispering that she still believes in him, the now lonely and withdrawn figure responds by slightly squeezing her hand in response.

With over 850,000 people suffering from dementia, this ad is likely to strike a chord with hundreds of thousands of people across the UK, including the families and friends of those who are affected by the disease.

This purpose of this campaign is to raise awareness of the variety of symptoms of the onset of Alzheimer’s, the fact this is a disease that can affect anyone, and to help raise donations for Alzheimer’s Research. We are told at the end that 100% of the donations received will go directly towards research into the disease.

The entire ad can be summed up in one line of Stephen Fry’s soft and endearing narration: “Only research has the power to change the future”.