Influencer marketing: the importance of authenticity

When Scarlett Dixon posted a – now infamous – image of a “typical” morning to her 52,000 Instagram followers, she triggered an enormous response.  Our influencer PR team takes a look at what happened.

The post, in which the blogger is seen enjoying a (curiously empty) cup of tea on a perfectly-made bed, surrounded by balloons and a plate of pancakes-cum-tortilla wraps, is an advert for Listerine. A bottle of mouthwash sits unassumingly in the background of the shot, and Scarlett’s caption includes the brand’s current campaign hashtag – #BringOutTheBold. 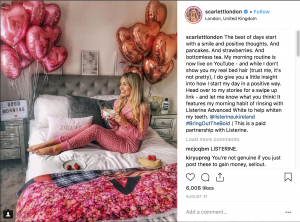 So far, so what? This kind of influencer marketing is two-a-penny on social media.

However, a subsequent tweet which called out the post for its clear falsity and stating that “Instagram is a ridiculous lie factory made to make us all feel inadequate,” has since been retweeted nearly 25,000 times.

Aside from creating a water cooler-style talking point for PR and marketing teams across the country, the incident shone a stark light on the importance of authenticity.

Celebrity partnerships are nothing new, but the apparently genuine endorsement of products through a personal Instagram account was – for a while – a highly effective, if deceitful, means to sell.

However, in a ‘post-truth’ internet era which has been defined by the proliferation of fake news, consumers are now far more attuned to this kind of bogus advertising and are becoming tired of it. Indeed, recent figures suggest that over half of people are getting sick of the “repetitive” influencer adverts they see on social media and would like stricter regulation around the practice.

The trouble is, many brands have simply failed to adapt to this changing tide quickly enough. Instead of aligning themselves with their target audience, they are essentially insulting its intelligence by expecting people to believe their obvious sales messages.

Clearly, the job of marketing is to create a compelling brand narrative; one that makes you stand out from the crowd.

However, in an effort to “be different”, organisations have tried to peddle messaging which is simply too distant from their core brand values to be believable. Best case, this comes across as confusing. Worst case; downright offensive (the less said about THAT Pepsi ad, the better.)

Take Ryanair, for example. The company’s differentiation in the market is its low cost – and has never made any admissions to the contrary. You will never see an advert for Ryanair that even suggests at luxury or expense because that just isn’t what the company stands for. Whilst its operations are often less-than-salubrious, there’s no denying that the messaging is spot on.

Does Listerine really conjure up an image of a glamorous breakfast in bed? Of course not. It’s almost impossible for consumers to associate this sort of advert with the mundane task of cleaning their teeth.

We find that influencer campaigns can be effective drivers of brand awareness and reputational uplift – but only if done right. Whether through social media marketing, blogger engagement or celebrity endorsement, meaningful value in influencer marketing comes from authenticity. Is that person right for your brand? Do they speak to the right audience and, crucially, do they speak to them in the right way?

These questions must be answered before planning or implementing an influencer campaign. As we noted in our recent post on the topic, there’s really no point just doing influencer marketing because it seems like that’s what you SHOULD be doing.

The threatening messages that Scarlett London received in the aftermath of her Listerine post were unacceptable for two reasons. The first – clearly – is that nobody should be made to feel physically unsafe due to something so trivial. This relates to an ingrained culture of bullying and online shaming which is a separate topic in itself.

However, also incredibly discomfiting was the fact that she probably wasn’t to blame. Yes, the tortilla wraps were fake pancakes and the cup of tea was empty. But the real issue here lies with Listerine. The company has tried to push an inauthentic brand message which, instead of creating brand engagement, has simply caused unnecessary PR disaster. And that just doesn’t wash.