#Tory Public Relations Strategy and the Concept of Nuance 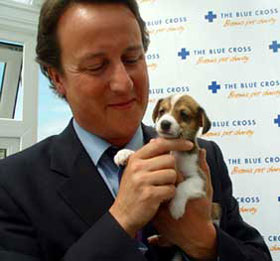 Is “Time for Change” really a good public relations message for the Conservatives? For me, it begs the question ‘a change to what?’

When Tony Blair brought Labour to power he did so by creating New Labour and claiming the middle ground. Now David Cameron is trying to do the same and win over moderates by appealing to middle-class swing voters.

It is no surprise that David Cameron has tried to soften the party’s image and has talked up lots of “social” and environmental policies. They were known as the Nasty Party, after all.

There was a time when you could say that the Conservatives stood for something obvious: the free market, law and order and anti-immigration and euro-scepticism.

The reason why Conservatism works is that its values are obvious, even to the most uneducated person. Low taxes, small government, euro-scepticism and an immigration are concepts that can be grasped, in some way or another.

Now David Cameron is playing around the edges of moderatism. This is a political space full of nuance where policies can be difficult to comprehend. On some issues there are no discernable policies at all.

At a time when the Labour party is at its weakest, his communications are not hitting home because they are not clear. If the public are to vote for change, they need to know what the change will mean for them and what it stands for.