The winner of the Biss Lancaster Cook Off is…

In a slight deviation from the usual business focus of this blog, I would like to name the winner of the Biss Lancaster cook off.

I guess it is no secret that I am leaving Biss Lancaster at the end of the week and this event, the brainchild of @JonWelsh, was created to be a mini celebration of all the fun times I’ve had at Biss Lancaster, but which doubled as a charity event to raise money for Whizz-Kidz, which is a charity that is all about giving disabled children the chance to lead a more independent life. http://www.whizz-kidz.org.uk/

So we all donated our hard cash (Brian Beech promised to double it), and our very own Frenchman Jerome Foucart took on Max Wild, a Blackburn born Ramsay wannabe in a kitchen based fight to the death.

The challenge was simple. Each create a dish, the Biss Lancaster team all eat it and I judge the winner.

Before announcing the winner, I would like to point out that it was a close contest. In a snub to his French culinary heritage Jerome chose to pursue a stir fry option. My French girlfriend thinks you are a traitor, but I admire your confidence to turn your back on such a rich pedigree of cooking excellence.

Max on the other hand created a skilfully crafted Warm Asian Beef Salad. Wild reached for the top draw and really surpassed himself.

And, without further ado I can now announce that the winner is…..

MAX WILD with what was an incredible dish full of balance. poise and finesse. Subtle spices, set against sweet honey and pepper. Extra points were awarded for serving the beef very rare in an office full of “cautious eaters”

Here is his recipe: 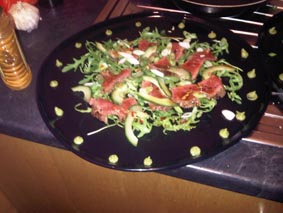 Take one fillet steak, a whole fillet for a party but individual fillets is fine for fewer people, rolled in toasted and crushed coriander seeds, black peppercorns and salt, then pan seared in a very hot dry pan on all sides ’til very rare (blue) and taken out of pan to rest on plate. Beef, DONE.

Infuse half a star anise in two tablespoons of soya sauce, one tablespoon of honey, one chopped fresh red chilli and a half inch piece of ginger. Warm in microwave for 30 seconds to amalgamate. Once cool add juice of one lime. No, bottled stuff will not do… You’re looking for a classic balance of salty, sweet and heat. Dressing, DONE.

Take a large clean plate, strew and scatter with a few leaves, ideally say mizuna but roquette or spinach is fine. Then lay on the beef, which you’ve thinly sliced on the diagonal across the grain, then strew with finely sliced spring onions, toasted and crushed cashew nuts and perhaps some finely sliced batons of cucumber. Dress generously with the dressing and put a few spots of wasabi on the side for those that like a little kick. Serve with little gem lettuce leaves for scooping up the lovely grub.

And you can mix this up a bit by using duck instead of beef, orange instead of lime, pistachio instead of cashew, etc. etc.