An interesting debate is rumbling about Facebook and its role in news. Some voices are evangelical about the social network, while others doubt why news organisations are putting Facebook at the heart of their digital strategy.

Earlier this week, Techcrunch recently criticised US news agency Associated Press (AP) for diverting Twitter users to their Facebook page. The blog couldn’t comprehend why AP would want to drive traffic to Facebook and not to their home page.

Of course, you need to understand this story in the context of TechCrunch’s on going dispute with AP. The two parties are not the best of friends.

To the common onlooker, diverting their users to Facebook and not your home page, does seem a little odd. On the other hand, one of the world’s foremost authorities on Social media, Steve Rubel, thinks that Facebook could soon “swallow the internet!” There is data to show that Facebook is now the number one source of news on the internet, greater than Google News. 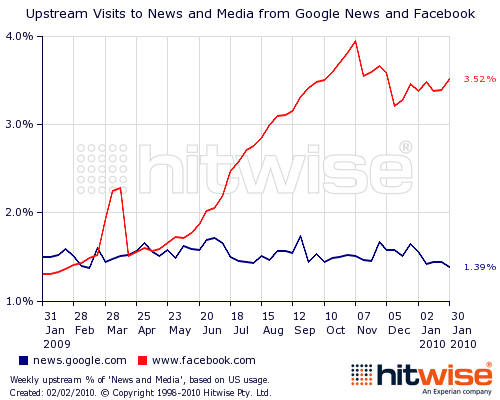 He sees a day when there could be a “siteless” internet and thinks AP’s move is ‘visionary.’

In the short term, it is the role of the Public Relations professional to decide how best to integrate social media, such as Facebook into PR campaigns. While Facebook is a great tool for brands, using it to make news sharable can be seen as more difficult than using Twitter, Digg, Reddit or other such sites.

However, in the future as more and more realtime services are integrated into Facebook, the changes Steve Rubel talks about could become a reality.

Or, of course, a new unexpected technology might come along and change things again! Nothing in the world of web 2.0 happens as expected. However, it is worth keeping an eye on Facebook – it is not just a place to update your friends on what you had for lunch.

You can create your own personal news channel in Facebook. I still prefer Twitter, but it is possible and people are using it

Slowly and surely Facebook is adding to its news functionality, such as the social search tool.

How else is Facebook spreading news? The Daily Perfect is a classic example.